April 8th, 2017 http://www.planetdogfoundation.org hosted a Gala Event in Portland, ME. They invited Olivia Poff & Charlie from the Puppy with a Cause on the Today morning show NBC, along with myself and Mike. Mike had been featured in their Blog in April of 2016.

It was a pleasure and an honor to be asked to attend and speak at Planet Dogs first ever Gala Event Fundraiser. To be able to help bring awareness to all  the work these great service dog organizations such as America's VetDogs and K9 on the Front Lines. Both of these agencies providing dogs to veterans at no cost allowing our nations veterans get back to living a normal life without placing them into debt. 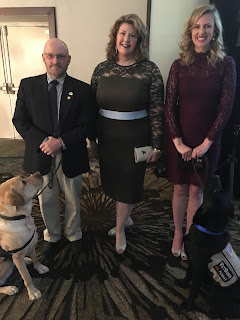 To have Charlie there also, the Star of the NBC Today Show's, Puppy with a Purpose this year, was great. To have both Mike and Charlie be able to show off how well behaved and task oriented they both are is a testiment to the great work America's VetDogs is doing. The TV interview with the Local NBC Affiliate and all the stops in and around Portland goes to show just how aware people are becoming about Service dogs and the mission to help veterans. It truely was a great trip and very humbling to say the least.

Here is the link to the NBC Portland Affiliate's Sunday morning piece that was done with Charlie and Mike. 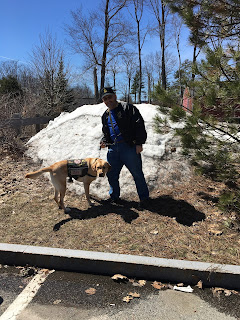 On a personal note to top off a grand weekend the plane was delayed to get me back down south. Now this may sound like a negative but instead of being a sour grape on a hot fudge sundae it was a glorious oversized maraschino cherry. It allowed time for an interaction between a Korean War Veteran and myself, facilitated because of Mike. This elderly gentleman had just been through a horific accident on the highway in Maine on his way to Canada. Both he and his wife were involved with two tractor trailors that totaled his car yet they were amazingly able to walk away with some scratches.

He was still shacken up but had been able to get his wife to Canada in time to see and help her sister. He then had to drive back to Portland to drop the rental off but knew no one. The hour and a half we were ablet o just talk (I listened) allowed him to calm his nerves as he was able to relive parts of his life that he had not talked about for over 60 years. I was so blessed that Mike was wearing his camo vest and made a comfortable key to open up the doors for this gentleman. As we boarded the plane he was a different person then when he first sat down next to me.

I talk about how our dogs change lives all the time. However often, we forget how as a team we touch others. The doors that Mike and Iris opened for me allowing me to become a whole person again was only the begining. I see how God has continued to work miricles in my life and so many others around me every single day. So often we forget to open our own eyes and look for those miricles. They may be small and hard to spot when we are stuck in our own head but all we have to do is put out our hand and try to help someone else and then we can see them blooming like 4th of July fireworks.

I thank God daily for giving me his 4 legged version of himself to remind me to be grateful for all he does daily.

“We can complain because rose bushes have thorns, or rejoice because thorns have roses.”
― Alphonse Karr
Posted by Unknown at 12:58 PM 1 comments