Well Iris and I are sitting in the Marriott downtown Chicago waiting for or ride over to speak at NCMS convention. This group of security professionals have decided to make America's VetDogs their charity cause for this year. Wells Jones and myself will be speaking to the entire group first thing this morning then doing handshakes the rest of the day till a dinner tonight. They put on a nice social last night and many of the individual groups from around the country also want to do something autonomously which we hope to help facilitate while we're here this week. 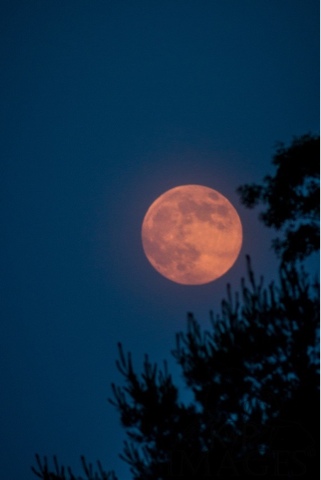 Many of the members and leaders of these groups are past military and work very closely with the military now so it was a great fit for their organization they told me in our discussions last evening. This is a wonderful way to get groups involved as a whole and makes it easier on individuals also so if anyone out there knows of organizations that might be interested in sponsoring a puppy or naming a puppy vetdogs does a real nice job of tracking that dog through the process and even facilitates a meeting if you want with the recipient veteran upon graduation. I know the grads in my class really enjoyed meeting all the people that helped make getting our dogs possible.

On another note, Iris and I will be heading north into the mountains of Vermont and New Hampshire when we return to the east coast. So next weeks entry will hopefully have picture again. In the meantime here is one from the super moon enjoy all!
Posted by Unknown at 5:15 AM 0 comments

Great news on all fronts

After a weeks absence we are back and writing. Just because we've been remiss in putting pen to paper does not mean that we have not been busy little campers. 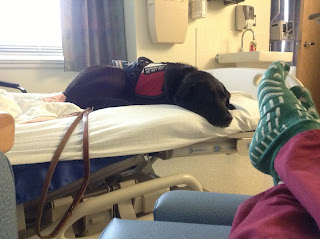 Before we start talking about travels lets get the best news out of the way. Our stay, and yes I mean our, Iris was able to stay in the hospital with me after the first night. The even better news is the new medicine that I was trying out has been working very well and appears to have had the desired effect. Thank God for modern medicine. Iris has actually been letting me sleep through the night which is actually something new to me. She still wakes me if I am having nightmares but the fact that she lets me sleep the rest of the time is something new, I have even had to set an alarm clock a couple times to make sure I am up in the morning. 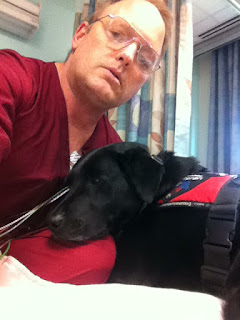 So as you can tell by the pictures of us in the hospital Iris made herself very comfortable. The staff loved her and constantly asked if they could take her for walks (I never let them). I had telemetry on that allowed me free reign of the hospital and up to 30 ft outside so I was able to break her on my own. During our walks we were able to answer many questions about service dogs and what they do along with hand out information about America's VetDogs. Hopefully some of the veterans I spoke with will be able to put their applications in and move on with their lives in the same way I have. 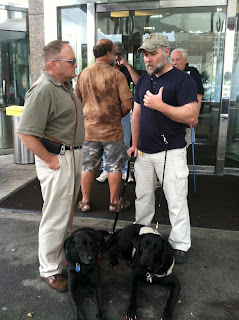 Once we left the hospital we hit the road running. Or maybe I should say stopping and getting hit??? Not but a couple miles down the road we were hit from behind by a truck that accidentally hit his break and gas peddle at the same time. The insurance person just finished the estimate prior to my starting today's writing and I will say I was surprised by his estimate. They say there is almost $6,000 in damage done to the rear end. Not to worry though it will all be fixed next week and no one was injured which is the most important part of that side story. 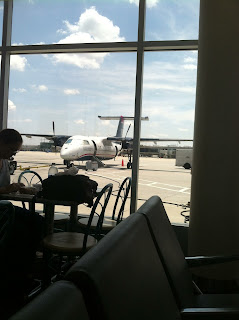 Last week Iris and I flew up to the New York State VFW Convention where we spoke to both the VFW and the Women's Auxiliary. It was a fun time got to meet another veteran and his service dog. It is alway great to share time with brothers esp others with similar experiences where words are not needed to understand. His service Dog was a beautiful Lab from America's VetDogs that was all dressed up for the occasion by Dennis's youngest daughter. Both his wife and daughter were able to drive down from the Ft Drum area where he still lives. I love hearing how the families are affected by these service dogs. I know how much Iris means to the Phyfe family at large but to see it in others seems to make it really stand out in my mind. Thank you Dennis and I look forward to hearing you get up and share soon, you did a great job telling your story at the tables the next step is to get you up front.

Our Flight home was quite the ordeal! We flew up on US Airways and got routed through Philly which is a bit out of the way but acceptable.  The way home we were on United and flew from Buffalo to Cleveland to get back to Providence. Talk about the long way around the horn. Thought we were back in the army or something with that routing but we made the best of it. One very big lesson learned is that the TSA and Airport people really do not yet have a handle on service animals and how to handle them. We have had a bone of contention with the fact that every airport we have been to so far has had their break area outside on the public side of the terminal. This is a huge inconvenience for anyone traveling with a service dog who has a short layover and long flights. Having to clear through security and carry all your bags out of the airport and usually to the same area the smoking area is is a major pain. I would love it if people started writing congress and TSA asking to create an area inside of security that service animals could be taken to go to the bathroom. Nuff said I know!! 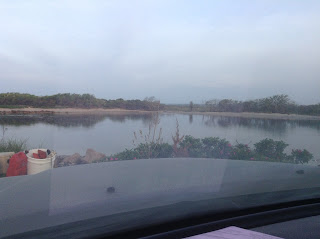 Ok for all those wondering yes we did go camping again even with all that flying. We did a trip up into southern New Hampshire and then another down to the coast of RI. The weather has been less then desirable but that will not stop me nor Iris from getting out and enjoying the outdoors. The picture show is a shot taken from the front seat of the truck while Jen is still asleep with the fog and peaceful water where we camped. The ability to put the camper in the back and run out to a spot is just such a freeing feeling I wish everyone could do it. But since so many can't I will do it for you. This week I will be going to the Massachusetts state prison in Framingham to speak to the puppy raisers. I also hope to go to either Vermont or New Hampshire to camp for a couple days.

Until next week God Bless!